As we prepare to break ground on the next phase of construction at the house, I started to go back and record some of the projects we've done over the past few years. I've been sorting through thousands of images taken and trying to slim that down into some interesting reminders of how things used to look.
It kinda depends on where we start in the timeline, but it roughly went like this.
13 years ago, the side yard of the house looked like this. That's a bocce ball court with a xeryscape and brick patio. 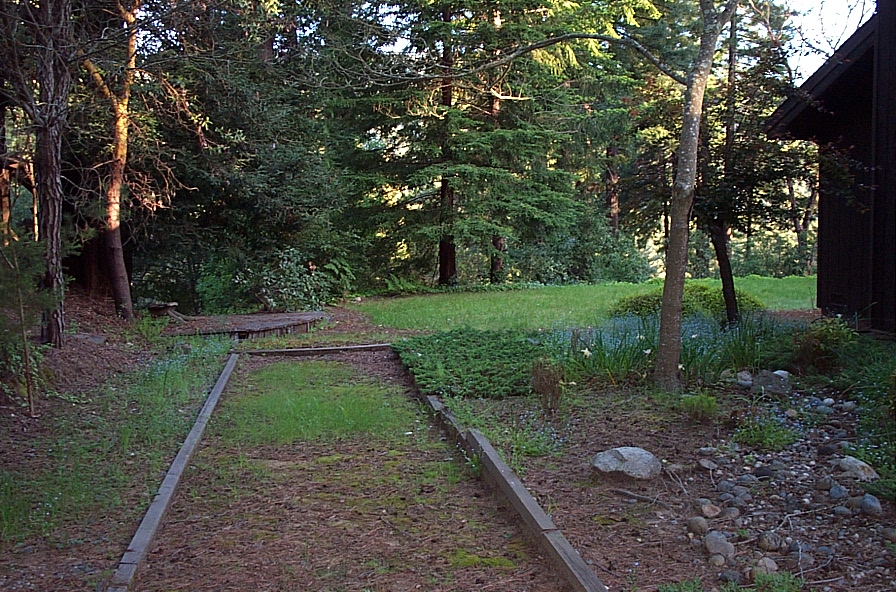 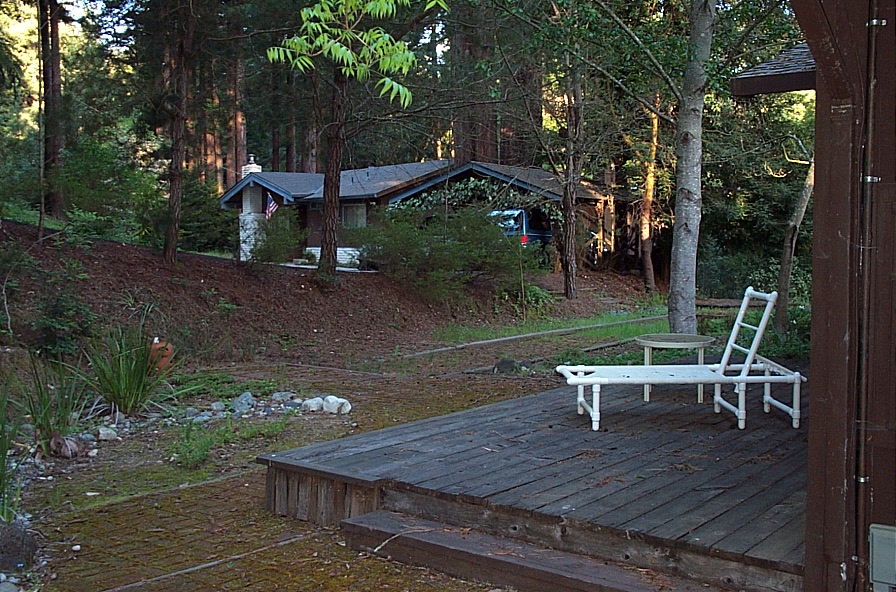 In May 2012 we began to see and smell standing water in the yard; the septic system failed. Around that time, I'd taken on one of my mountain man projects and was using up some vacation time cutting brush on our hillsides, then hauling it by hand up until the pile was large enough to get someone with a chipper over.
We learned a lot about mountain livin' at this time. Our learning could be thought of as rules.
Rule 1. When the septic system stops working you have a real problem.
After getting a diagnosis that the septic was probably shot, we were referred to Ken Clausing at A+ Construction here in Felton, CA. It turned out Ken was able to come up that afternoon and poke around. Ken's a long time resident of the Santa Cruz mountains and knew what our options were. Ken began with some explatory trenching. 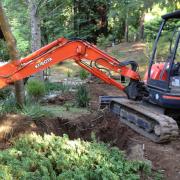 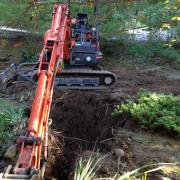 Well, as you can probably guess, the story gets better. The explatory trenching showed that our leach lines had failed. So, we have to get some permits filed and start trenching for new leach lines. Septic leach lines need to be about 100', luckily we had that. So we trenched 100' out and 10' down. That created a lot of  extra fill material that wouldn't be going back in, because we'd need all new drainage gravel and fill. Thus began a new project; extend a second terrace and create a fire break, but we'll get to that later.
But wait. See those 40' fully mature trees? See that landscaping and brick patios? Yup. That lead to some mountain livin' ephiphines that we now think of as rules.
Remember mountain man clearing brush? Yeah, when Ken saw what I was doing, he drove his excavator over to the side of the hill and grabbed about 5 oak trees and yanked them out of the ground. That had represented some 2 hours of sweaty work and corresponding analegsics. Plus, I looked silly. Lynda saw what he could do with the tools, and we decided that was a good spend and it cleaned up the property leaving us with a good fire break. Ken had also recommended getting wild flowers seeded out on the hill to cover up all the newly exposed hillside. 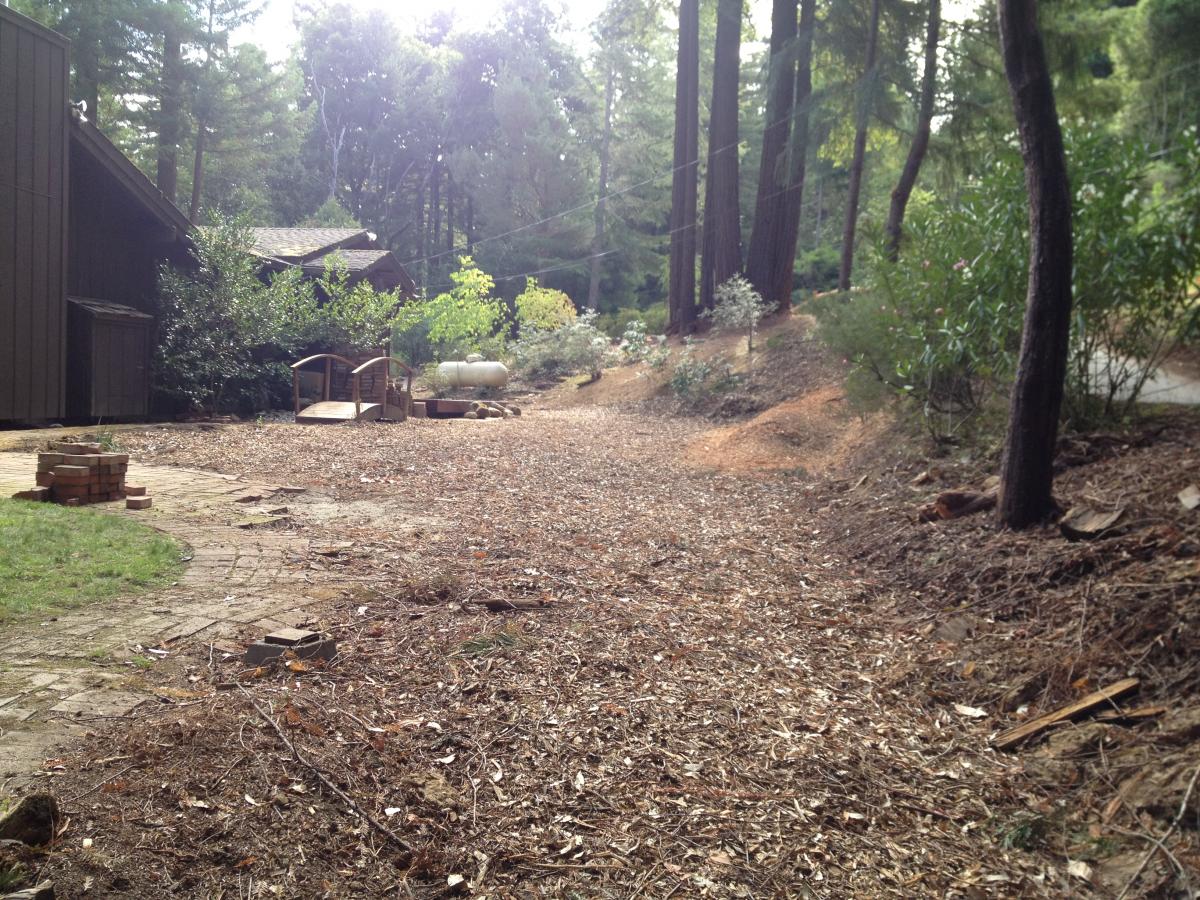 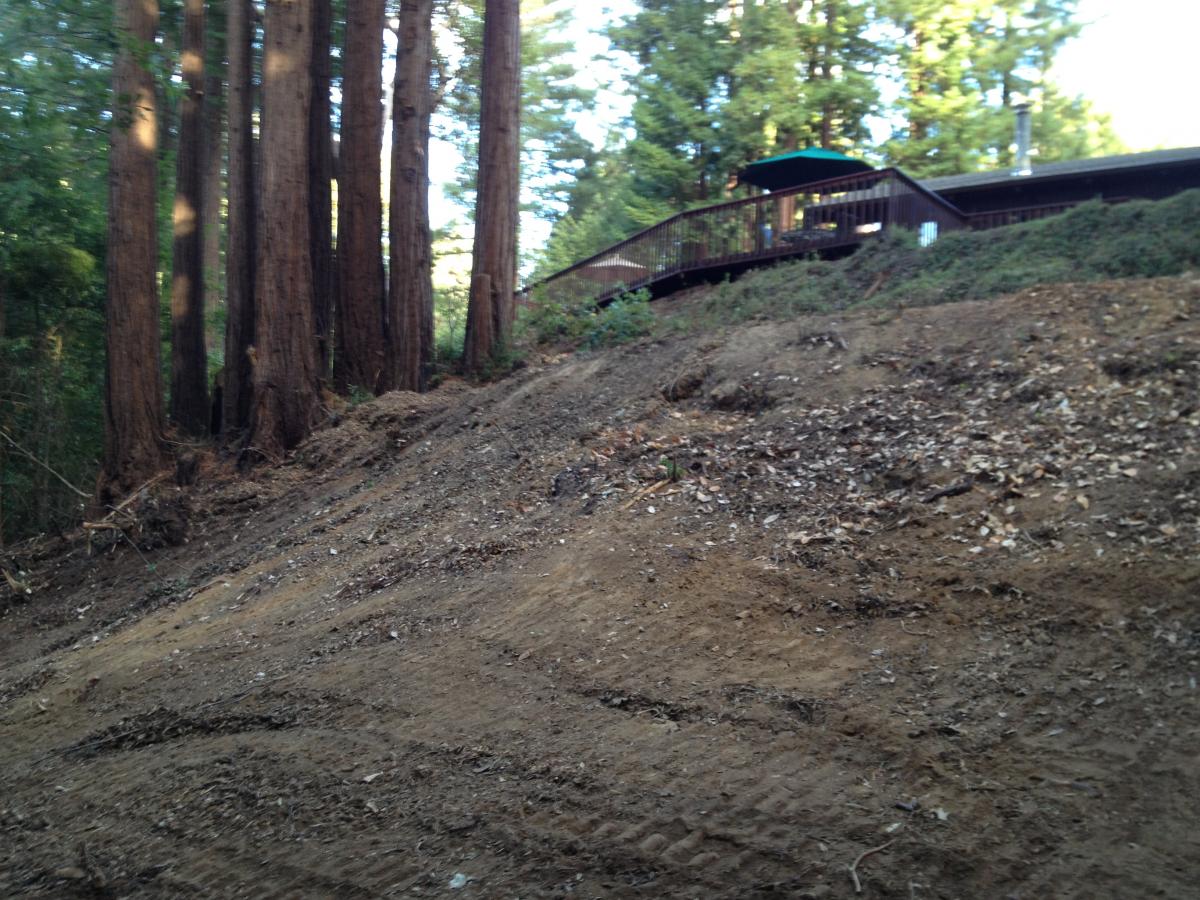 Covered leach field, hillsides absent the brush.
We were able to work with Morgan Kost of Superior Hydroseeding, who was able to shoot a mix of wildflowers and mulch on the hill side.
With all the heavy equipment, we also tried to fix an older problem of drainage from the driveway and front of the house. So, Ken cut a swale into the base between two groves of redwood drives. While he was at it, we extended and graded a terrace that runs below the house. This walk/run track can be used for exercise. 10 laps is a mile.